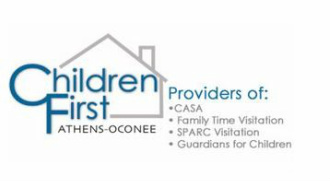 Athens-Oconee CASA (Court Appointed Special Advocates) is a program offered through Children First, Inc., a 501 (c)(3) not-for-profit organization based in Athens, Georgia. This non-profit is dedicated to promoting safe homes for children in times of family crisis, and provides many other programs that serve families in need. More information about Children First can be found at their website, http://www.childrenfirst-inc.org.

The Athens-Oconee CASA program is included in a network of 955 programs throughout the country that recruit, train, and support volunteers to represent the best interests of abused and neglected children in the courtroom and other settings.

Jane started as a CASA in Hall County in 1997 and she served as a volunteer for over ten years. She
joined the staff at Athens Oconee CASA in March of 2008 and loves her position as volunteer coordinator. Jane has a great appreciation for the wonderful volunteers that serve in the program, and she advocates strongly for the service they provide. Jane is married and has three daughters as well as an adopted grandson.
jane@athensoconeecasa.org
706-613-1922x3

Susie joined Athens-Oconee CASA in 2008 to create one of the strongest volunteer coordinator teams in Georgia. She is a dedicated community servant, working with numerous local organizations to help make Athens a great place to live and work.

Mary became acquainted with the Athens-Oconee CASA program in 2007, when she took on the position as office assistant. She has enjoyed growing with Children First, Inc. over the past five years, and she is confident that the organization will continue to grow in the future. Mary is passionate about the CASA program because she truly believes that a single person standing up for a single child makes all the difference in the world.

Tony joined Athens-Oconee CASA in May 2012 as the Executive Director of Children First. His interest in working in child advocacy can be traced to law school when he worked on an appointed termination of parental rights case for an attorney he clerked for.  He brings over ten years of administrative and managerial experience in government, higher education and industry to Athens-Oconee CASA. In his spare time, he enjoys spending time with his three children.

Thank you ladies for making the commitment to serve as a CASA volunteer! You have been a wonderful group to teach, and we can't wait to get you assigned to a child!From left to right: Audey Lee, not sure, not sure, Marie Clark, Andrea Gonzalez, not sure, Paige, Lilly, Rebeka Geer

I'll then transition into discussing the importance of the CASA volunteers in Athens-Oconee county:
Since the summer of 2011, there has been a 200% increase in the number of children being brought into care in Athens-Oconee county. I'd like to list (or provide graphics) of the statistics of children in care in our county. I think the visuals will solidify the importance of the CASA program and let people know how in need of volunteers we are. Can you provide me with this information? Jane posted graphics one day in CASA training so if you don't have this information, I know she does.